Spice Up Your Life: Hot Chilies 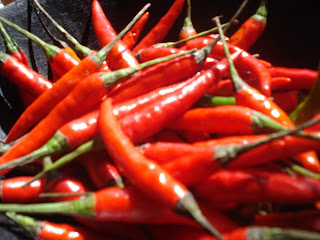 I generally love spicy food and I enjoy experimenting with the use of different spices. I was recently invited to participate in a cooking show on GreekTV and I was asked to prepare something summery, so I decided to present a more Mediterranean version of ceviche, a popular Latin American dish with its origins in Peru. One of the main ingredients in ceviche is spicy chili peppers and that’s how I started reading about chilies. Chilies can be added in almost any dish, desserts, tea blends, even cocktails and apart from that they are very beneficial for our health. All I read was so interesting that I really feel I must share some of the information I gathered!
The chili pepper is a fruit of the Capsicum genus and a member of the Solanaceae, or Nightshade, family, which includes tomatoes, potatoes, eggplants, and tobacco. Chilies were originated in America and  have been a part of the human diet (in the Americas) since at least 7500 BC. There is archaeological evidence at sites located in southwestern Ecuador that the chili peppers were domesticated more than 6000 years ago.
From Mexico, which at the time was a Spanish colony that controlled commerce with Asia, chili peppers spread rapidly into the Philippines and then to India, China, Indonesia, Korea and Japan and were gradually incorporated into the local cuisines.
Upon their introduction into Europe chilies were grown as botanical curiosities in the gardens of Spanish and Portuguese monasteries. But the monks experimented with the chilies' culinary potential and discovered that their pungency offered a substitute for black peppercorns, which at the time were so costly that they were used as legal currency in some countries!!!
Chilies spread across the world and were used in both food and medicine. They can be used fresh or dried or they can be powdered (after they have been dried) (i.e. Cayenne pepper). They make a wonderful oil (chili oil) that is widely used in Italian cuisine (peperoncini oil) and is a great pizza topper, can be used in salad dressings or pasta dishes etc.  Alternatively, chilies can be tinctured for medicinal purposes. Diego Alvarez Chanca, a physician on Columbus' second voyage to the West Indies in 1493, brought the first chili peppers to Spain, and first wrote about their medicinal effects in 1494.
Chili peppers are high in Vitamins A, C, B complex, calcium and potassium. They work as a wonderful healing aid for the digestive system since it acts as a catalyst and increases the effectiveness of other foods and herbs when used with them. It is also very healing for the heart and circulatory system. Studies have shown that they can rebuild the tissue in the stomach and the peristaltic action in the intestines.
…And the spicier the chili the more beneficial it is for our health!!! 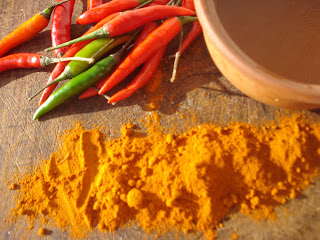 Here I have listed some of the most important benefits and medicinal uses of chilies:

o   They fight headaches and migraines.
o   They help us build up our immune system.
o   They stimulate digestion and help the absorption of food nutrients and herbs (that’s why it is a good idea to add it in herbal teas).
o   They stimulate circulation and blood flow (especially good for cold feet and hands).
o   They aid in clearing mucus from the nose, combating nasal congestion and contain antibacterial properties that help fight chronic sinus infections.
o   They cause sweating and, as a result, help reduce fevers and relieve us from cold and flu symptoms.
o   They fight prostate cancer and leukemia.
o   They stimulate fat burning and aid in weight loss.
o   They work against high blood pressure and high blood cholesterol levels.
o   They are beneficial for the heart (even in cases of mild heart attacks or a simple arrhythmia it is very helpful to drink a  warm chili tea).
o   They are excellent medicine for the lungs as they act as decongestants and have also been found to protect the lung tissue.
o   They can be used externally as a pain-relieving muscle rub and joint liniment. (The source of the heat is capsaicin, the fiery phenolic resin found in most hot peppers. Capsaicin causes nerve endings to release a chemical known as substance P. Substance P transmits pain signals from the body back to the brain.)
o   They stop internal bleeding (when drunk as a tea).
o   They work against allergies.
o   They can be used for the treatment of arthritis, bursitis, and for temporary relief of pain from psoriasis, herpes zoster, and neuralgia (these treatments are most appropriate for long-standing chronic conditions and not acute inflammations).

And a list of warnings:
o   Be careful not to touch your eyes after you’ve chopped a spicy chili or you will suffer!! (But after a while the irritation will eventually go away). The same applies for open wounds or broken skin.
o   Placed directly on the skin, chilies (fresh or powdered) can cause burns and even blisters, so it is best to be diluted in oil before placing it on the skin, or you can mix it with flour and water until it forms a paste.
o   Use small, cautious doses only
o   Do not use cayenne in cases of high fever (40 degrees Celsius / 104 degrees Fahrenheit or above).
o    They are not recommended for use by individuals who have rapid heart rates or who become overheated or perspire easily. In addition, they should be avoided by people who suffer from asthma and gastrointestinal irritation or inflammation, except under the supervision of an experienced herbalist.
o   When cooking or making medicines with cayenne peppers, you must take into account the widely varying intensities (heat) of different peppers -- from very mild to extremely fiery. The world's hottest chili pepper is the Trinidad Scorpion Butch T pepper.

See the table below for a more in depth analysis of nutrients:
Nutritional value per 100 gr. (in % of Recommended daily allowance)

Posted by Stirwaytoheaven at 8:21 PM

Stirwaytoheaven
I am a supporter of simplicity and the same applies to my philosophy of cooking. I choose my ingredients to be fresh and of the best quality and I try to combine them in ways that I can sense their full taste, respect their freshness and appreciate the contribution of each one ingredient in my plate. I strongly believe in the healing powers of the food we eat, the water we drink as well as the herbs and everything our wise earth has to offer. The energy, intention, feelings and our mood in general, while cooking and eating, determine the healing qualities of the food. It is important to really enjoy the whole process and experience of cooking and eating, never feeling deprived for the sake of being healthy, but knowing how to balance everything, learn to cook in new ways and invite new ingredients to your kitchen. Healthy food can be extremely tasty, extremely creative and extremely therapeutic!